Over the past week, ChainLink saw its price go up by 53.65%. It is above its 20 day moving average by 43.33%, so it’s very far away. ChainLink’s bullish momentum, if assessed by its distance from its 20 day moving average, is well above average relative to its peers, and thus may be a sign the market for the coin is overheating and due to correct downwards. Regarding volatility, ChainLink is more volatile than roughly 98% of coins in our index, so bear that in mind if you decide to trade it. Based on volatility over the past three weeks, we can expect ChainLink to experience a price range in US dollars between 0.3266995 and $1.060751. 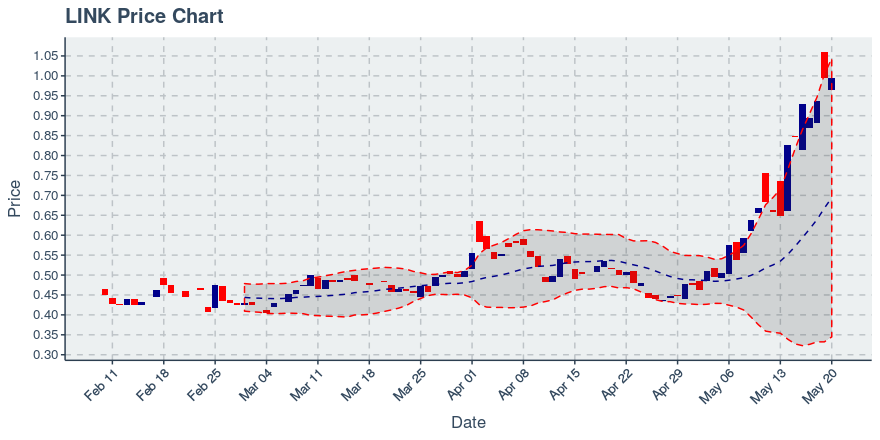 Over the past week, Chainlink saw its daily volume range between 1,576,059 and 40,680,619 units of its own currency. Over the past three weeks, the trend in both volume and price have clearly been up. Over the past week, Chainlink saw its trading turnover — which we define as average daily trading volume divided by circulating supply — register at 6.4%. Its turnover rate is more than approximately 73.2% of the cryptocurrencies in our index, so it’s above average and thus will have enough liquidity for many investors/traders.

Over the past week, ChainLink saw its holders go from 27,533 to 28,729, an increase of 4.34%. As for overall transactions, they increased from 200,263 to 208,631 — an increase of 4.18%. The combined engagement growth rate (growth rate in holders plus growth rate in transfers) of ChainLink is thus at 8.52% which, relatively speaking, is ahead of 82.86% of the cryptocurrencies we’re tracking. One interpretation of this may be that the coin may be on track to getting and sustaining actual usage.

At the moment, Chainlink has 30 repositories open to the public on GitHub, with the oldest one now being 2.67 years young. Its most recent public update was within the past day, which is pretty good, as it suggests the coin is still under active and rapid technical development. Chainlink’s public repos now have 644 which is about average compared to other similar coins; that’s more than approximately 58 % of coins in its index. The coin has 14 total outstanding issues across all 30 of its public repositories on GitHub. Relative to the number of watchers it has, though, its open issues count doesn’t seem like something to worry about. To put the situation in context, Chainlink has a better issue/watcher ratio on its GitHub than 90% of similar coins we’re tracking.

We found one link over the past week about Chainlink that we thought was especially worth sharing. Where available, we included a snippet of the article that we thought might be interesting.

OMGFIN attempts to screen all tokens before they come to market, however, even with the best due diligence there are still risks when investing….Chainlink (LINK) is now available on OMGFIN, you can deposit and withdrawal Chainlink (LINK) now.