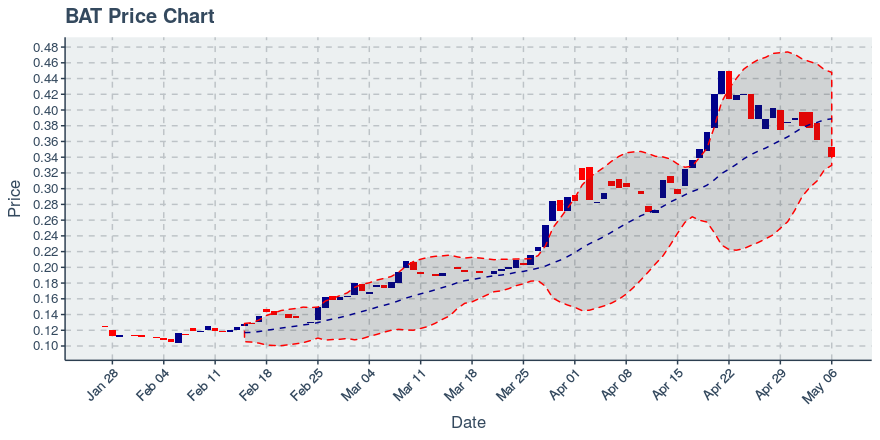 In the week prior, the daily volume for Basic Attention Token has ranged between 6,372,688 and 32,066,770 currency units. Looking back over past 21 days, the trend in volume,like the trend in price, is choppy and does not reveal a clear direction. The past 7 days saw Basic Attention Token’s trading turnover — meaning the percentage of its available supply that was traded — come in at 1.88%. This turnover rate is higher than approximately 60.42% of the cryptocurrencies we monitor, which means it’s above average and thus will have enough liquidity for many investors/traders.

Basic Attention Token saw the number of wallets holding its coin go from 110,361 to 128,662 over the past week — a change of 16.58%. As for overall transactions, they increased from 844,977 to 930,617 — an increase of 10.14%. The combined engagement growth rate (growth rate in holders plus growth rate in transfers) of Basic Attention Token is thus at 26.72% which, relatively speaking, is ahead of 87.50% of the cryptocurrencies we’re tracking. One interpretation of this may be that the coin may be on track to getting and sustaining actual usage.

Basic Attention Token currently has 30 public repos on GitHub, with the oldest one clocking in at 2.57 years young. Its last public update to any of its repositories was within the past week which is not bad, as the coin is still being updated routinely. Basic Attention Token’s public repositories collectively have a total of 221 watchers, which is below average relative to its peers; that’s more than only 30 % of the 100 similar coins in our index. The coin has 106 total outstanding issues across all 30 of its public repositories on GitHub. Its number of watchers, when viewed against its open issues count, is quite poor, and may potentially indicate some concern that the software is at risk of not being updated fast enough. Our hypothesis that the open issue/watcher ratio may be of some value in assessing the healthiness of a coin’s software development process, and for Basic Attention Token, this ratio was better than a mere 6 % of the similar coins we track in our index.

Over the past week, we found 2 links about Basic Attention Token that we found especially interesting. If available, we added an excerpt from the article to help give a taste of what it is about.