At the time of this writing, Paxos Standard has a price of $0.9992 USD, which puts it down by approximately 0.08% from yesterday. The down day for Paxos Standard yesterday was a reversal from the day before it, which puts its price at 0.08% below its 20 day moving average. Over the past two weeks, price has been in a unclear trend. Paxos Standard’s expected trading range — as forecasted by the Bollinger bands indicator, which determines a range based on momentum and volatility over the past two weeks — is between $0.997929 and $1.002091. As we are closer to the bottom of that range, rangebound traders may wish to consider exploring buying opportunities. 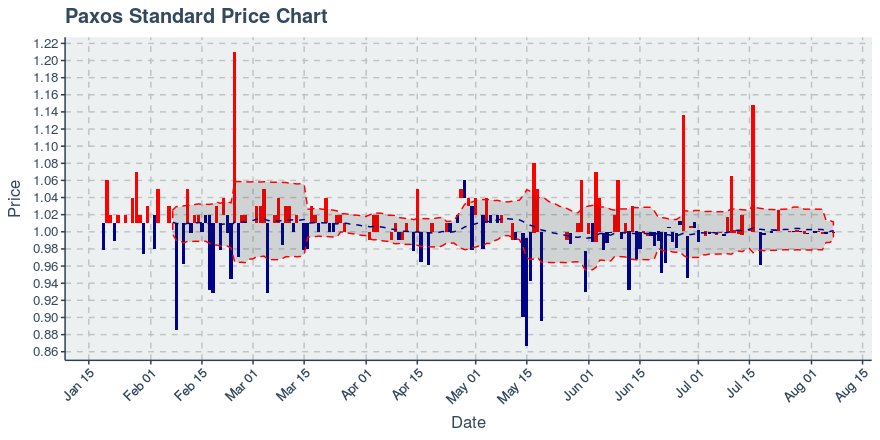 The currency’s market cap currently stands at $207 million US dollars.

The following metrics showed unusual change over the past 24 hours for Paxos Standard: holders added. Further investigation may be warranted.

Of the coin’s total money supply, the richest 1,0000 wallets currently own 99.45%. Paxos Standard’s smart contract owns approximately 0.05% of its own total money supply. This amount hasn’t changed over the past week.

Paxos Standard hasn’t had any activity on any of its GitHub repos since July 29, 2019 — 9 days prior. Growth rates for open issues — a “”to-do list”” of sorts and watchers (“”subscribers”” following a code repository) for Paxos Standard are growing by 0 and 0.03, respectively, over the past 30 days.

In the past day, Paxos Standard’s Twitter followers went up by 3, respectively. Twitter appears to be the most popular place to follow the company, and thus may be worth monitoring. Here is the Twitter page for Paxos Standard.