At the time of this writing, Maker has a price of $476.3 USD, which puts it down by approximately 1.17% from yesterday. Maker is currently in a down, and it should be noted that this is now the the 3rd day in a row that price has been down. Moreover, Maker is now 13.77% below its 20 day moving average. Traders looking for a range to trade within may wish to note that the Bollinger bands (a price indicator based on recent momentum and volatility) for Maker imply the currency may oscillate between $460.4282 and $644.3008, based on how price has behaved in the two weeks prior. Given its boundaries, rangebound traders may find it compelling to entertain buying, as we are nearer to the bottom of the range. 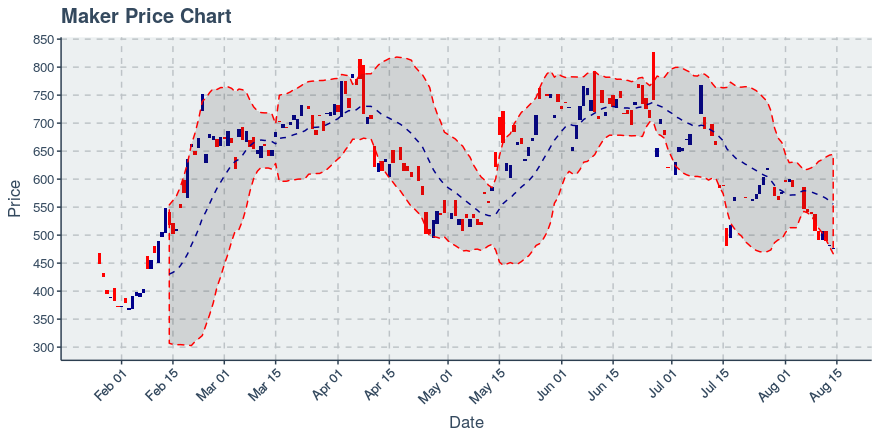 As for Maker’s market cap, it is currently at about $478M US dollars.

Yesterday saw 2,381 transfers amongst holders of Maker. In terms of estimating the number of holders, over the past day the total number of wallets holding Maker has gone up by approximately 54. Our engagement rank, which combines weekly percentage growth in number of holders and number of transfers, has Maker ranked 11 out of the 35 Ethereum tokens we’re tracking.

In terms of wealth concentration, the richest 1,000 wallets own 98.49% of the coin’s total money supply. The percent of the currency that is owned by wallets that are both belonging to exchanges and in the top 1,000 richest wallets of the token comes out to 1.23% of the currency’s money supply. Exchange ownership grew by -0.06% over the past week, while the overall ownership percentage of the top 1,000 richest wallets grew by -0.01% over that time period. Maker’s smart contract owns approximately 0.08% of its own total money supply. This amount hasn’t changed over the past week.

Social media growth, in terms of Twitter followers and Reddit subscribers, came in at up 65 and 21 over the past day for Maker. If you are interested in following Maker on social media, Twitter, where it has 29,421 following it, may be a good place to start. Here is the Twitter page for Maker.