Maker is up by approximately 0.1% from the previous day, with its price currently hovering around $481.95 USD. Yesterday’s up day is a reversal of the day before it; in terms of trend, though, note that the current price is now 13.53% below its 20 day moving average, and is currently in a down trend over the past 14 days. In terms of an expected trading range, the Bollinger bands on Maker suggest price may bounce between $467.5204 and $647.2246 based on its momentum and volatility over the past 14 days. Given its boundaries, rangebound traders may find it compelling to entertain buying, as we are nearer to the bottom of the range. 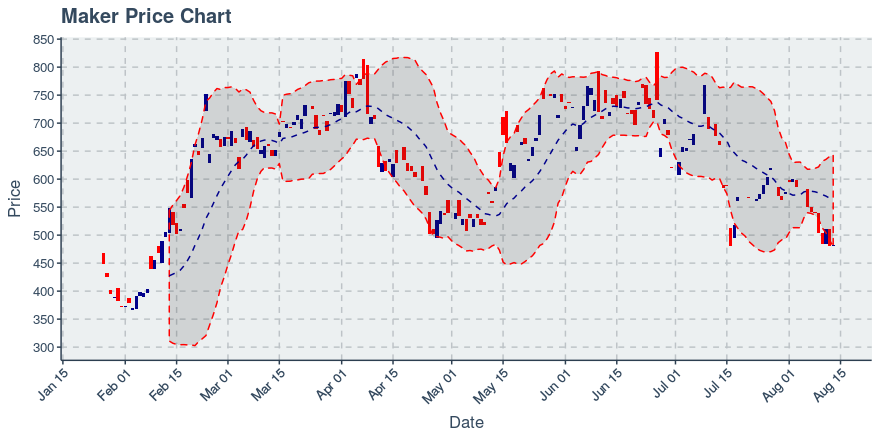 The market capitalization of Maker, or the amount of US dollars it would take to buy up all the circulating coins, is currently estimated to be $481 million.

No transactions amongst holders of Maker occurred yesterday. In terms of estimating the number of holders, over the past day the total number of wallets holding Maker has gone down by approximately 0. Our engagement rank, which combines weekly percentage growth in number of holders and number of transfers, has Maker ranked 10 out of the 54 Ethereum tokens we’re tracking.

The top 1,000 Maker wallets hold over 98.5% of the token’s total money supply. The percent of the currency that is owned by wallets that are both belonging to exchanges and in the top 1,000 richest wallets of the token comes out to 1.24% of the currency’s money supply. In terms of growth rates, the share of total supply of the richest 1,000 wallets has grown by 0% over the past week. For the exchange wallets within the richest 1,000 wallets, their share has grown by -0.04%. The underlying smart contract itself for Maker owns 0.08% of the total money supply; over the past week, this amount has not changed.

The last activity date on Maker’s GitHub repository occurred on today, August 13, 2019. To understand how code development is progressing, we can observe growth rates over the past 30 days in the number of open issues and the number of watchers: open issuers have been growing at about 0.97 per day, while the number of followers watching Maker’s repositories is growing by 2.73.