At the time of this writing, Basic Attention Token has a price of $0.1692 USD, which puts it down by approximately 1.28% from yesterday. The down day for Basic Attention Token yesterday was a reversal from the day before it, which puts its price at 6.84% above its 20 day moving average. Over the past two weeks, price has been in a unclear trend. From another vantage point, note that price has gone up 19 of the past 30 days. As for the volume underlying yesterday’s move, note that the price change occurred on volume that was approximately 281.4% greater than its 7 day average volume.

In terms of an expected trading range, the Bollinger bands on Basic Attention Token suggest price may bounce between $0.148915 and $0.167815 based on its momentum and volatility over the past 14 days. As we are closer to the top of that range, rangebound traders may wish to consider exploring shorting opportunities. 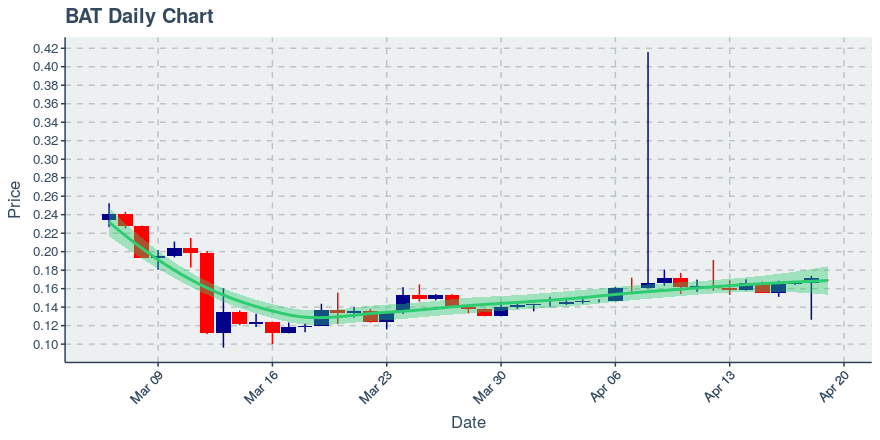 As for Basic Attention Token’s market cap, it is currently at about $246M US dollars.

How are the Strong Holders of Basic Attention Token Faring?

And in regards to wealth distribution, note that the top 1,000 Basic Attention Token wallets hold over 90.76% of the token’s total money supply. If we focus on exchanges, which may be an correlated with liquidity and greater confidence in the currency, the exchange wallets that are in the top 1,000 wallets own 3.61% of the currency’s total money supply. Exchange ownership grew by -0.22% over the past week, while the overall ownership percentage of the top 1,000 richest wallets grew by -0.08% over that time period. The underlying smart contract itself for Basic Attention Token owns 0.02% of the total money supply; over the past week, this amount has not changed.