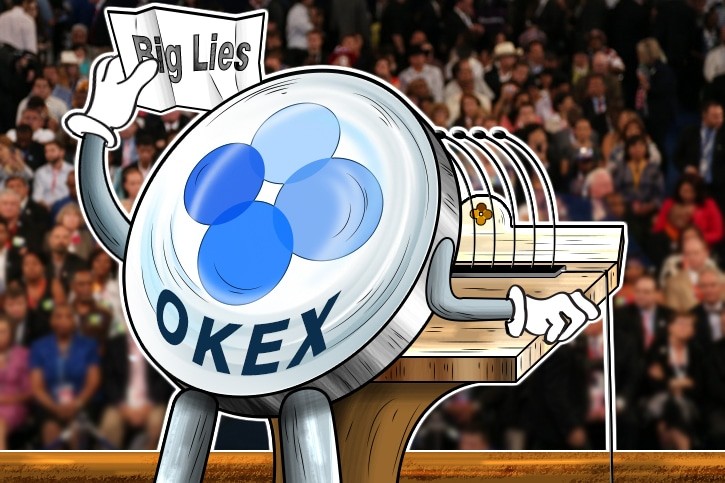 Sylvain Ribes, a crypto trader and researcher, is calling out Okcoin as phony. His new report, published March 10, finds that up to 95% of the Okex exchange volume is completely made up. He says that the variances he found on this exchange simply cannot be explained away by any other means, and calls the doctoring “laughable and obvious.”

Too big to be within the range of expected error

A study published by Sylvain Ribes has concluded that massive amounts of Okex volumes are obviously falsified. According to Ribes, the exchange doctors its numbers by up to 95%, meaning that the currently #1 ranked exchange, with a cited $1.7 billion total volume, is absolute bunk.

Ribes’ study was based on investigating how badly the market would fall if the equivalent of $50 thousand USD of any one coin were to be liquidated. In this study, Ribes coins the term ‘slippage’ to describe the percentage variance between mid-spread price and the lowest sale price of liquidation.

He tested various currency volumes on multiple exchanges, including GDAX, Bitfinex, Binance, and Okcoin. He found huge inconsistencies between the platforms and said that these kinds of variances could only come from phony inflated reporting. Variances of up to 95% cannot be dismissed by user behavior or other factors but must be the result of overstated figures.

Okex, in particular, caught Ribes’ eye. He says that artificial volumes and wash trading on crypto exchanges should be expected to some degree, due to the fact that markets are unregulated. However, according to Ribes’ research, many pairs cost more than 10% in slippage for liquidating the $50K test number.

Many pairs boast up to $5 million dollar volumes and are high profile, supposedly liquid assets like NEO/BTC, IOTA/USD, and QTUM/USD. The slippage numbers for these pairs alone convinced Ribes that he had found a serious problem. Upon logging into the exchange platform, he found obvious volume faking.

Where exchanges like Poloniex are relatively liquid across all pairs, Okex volumes seem to lack that liquidity. This lack of liquidity suggests volume doctoring, to Ribes. He also found that the Huobi Pro platform suffers similarly from doctored numbers, with up to 82% of their volume being fake. His study also took a look at Bittrex, Hitbtc, and Binance, among others.

According to Ribes, Hitbtc is a bit less liquid than it should be, but small differences in liquidity seem to be explainable by various methods. Binance, he says, had intriguing results in his test, but also have a higher standard of policy. He says that inspecting the volume history of Binance does not show obvious signs of suspicious behavior and that the numbers seen there are mostly accurate.

In response to Ribes report, Zhao Changpeng, CEO of Binance, called the study a “good in-depth analysis,” saying further that Binance believes that restricting flash liquidity, and other actions, is an asset to their traders.

Since Ribes has released his report and called out the shady behavior of Okcoin and Huobi Pro, he has publicly invited them to respond via Twitter. He says that he would be happy to quote their response. These exchanges have not gone unnoticed by other researchers, and have been questioned about their practices in the past. It seems, now, that they have some serious work to do in order to continue as viable exchange networks.