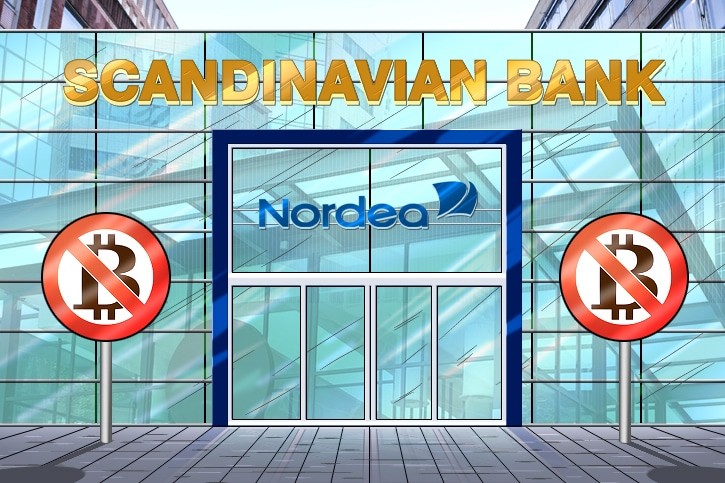 The prominent Scandinavian bank, Nordea, has implemented a new policy which forbids any employee from owning or participating in the cryptocurrency industry.

The major banking institution, Nordea Bank AB, has recently introduced a somewhat controversial policy which forbids any of its employees from either trading or owning cryptocurrencies, including the popular bitcoin. The bank, which was formerly situated in Sweden but recently moved to its largest stakeholder, Finland, has demonstrated a well-recorded skeptical attitude towards the cryptocurrency industry.

The Nordea Chairman, Björn Wahlroos, has made no secret of his objections against cryptocurrencies. Ever since 2014, the Chairman has expressed several grievances pertaining to the industry, including its lack of inflation as well as its sense of anonymity that it affords users. In addition, the bank’s CEO and president, Casper von Koskull, also expressed his sentiments about the industry and denounced bitcoin as being a joke.

Von Koskull explained his concern by stating that considering the billions spent on financial regulation, a decentralized currency such as bitcoin was a joke. The Nordea CEO added that something like bitcoin cannot be allowed to exist at least without proper financial controls, otherwise it would become absurd.

Whether von Koskull is right or not, Nordea employees have been placed in a uniquely uncomfortable position. Currently, the bank is listed on three separate exchanges and enjoys thousands of physical branches located throughout Northern Europe, specifically the Scandinavian region. In addition, the bank has a client-base of almost 20 million customers which include both corporate and retail users, in addition to its 5 million exclusively online clients. At the moment, Nordea boasts a total market cap of almost half a trillion US dollars.

This decision did not go over well with the cryptocurrency community, and thousands took to social media platforms to express their rage. One particular Twitter user, @samisin, questioned the sheer legality of the matter and stated that the ban extended to any Nordea employee including IT staff, cleaners, secretaries, and any other staff. Several users chimed in by citing violations of privacy and human rights.

However, some professions are plagued by possible conflicts of interests and employees often result in drastic measures to prevent them. In the journalism industry, for example, professionals are encouraged to avoid conflicts of interests which could arise from personal stakes in a company or any activity which could lead to personal gain and cloud an objective judgment. Nathaniel Popper, for example, the popular New York Times writer has flatly refused to participate in bitcoin in fear that it might cloud his judgment.

The JPMorgan Chase CEO, Jamie Dimon has also come under fire for stating that any of the firm’s employees would be duly fired if discovered to be dabbling in bitcoin. While to some these decisions seems like an attempt to avoid a conflict of interest, the bitcoin community maintains that it is a violation of human rights, not to mention a double standard.

For example, by using his own Logic, wouldn’t Popper’s use of fiat currency also cloud his judgment on issues, as that creates an inherent bias towards government-backed currency? The issue has become one of philosophy and different conflicting ideologies. For example, mainstream financial institutions, such as banks, have previously declared cryptocurrency as a dangerous and volatile market due to its speculative nature. However, considering where the majority of banks’ interests lie, this could be considered as nothing more but a self-serving claim, ungrounded in either fact or concern for their clients.

To use Nordea as an illustration. The bank recently completed a “capital relief deal” which imposed heightened risks of up to $10 million on their investors. This strategic method, also sometimes referred to as “synthetic securitizations” are conducted in order to alleviate the bank from the amount of money and assets required to physically hold in the event of losses. Nordea recently abruptly retracted from this deal.

According to Bloomberg, Nordea terminated the deal in the wake of their latest endeavor which will eliminate 6,000 jobs. The indiscriminate job elimination has raised several questions on the bank’s attitude towards the well-being of their employees.