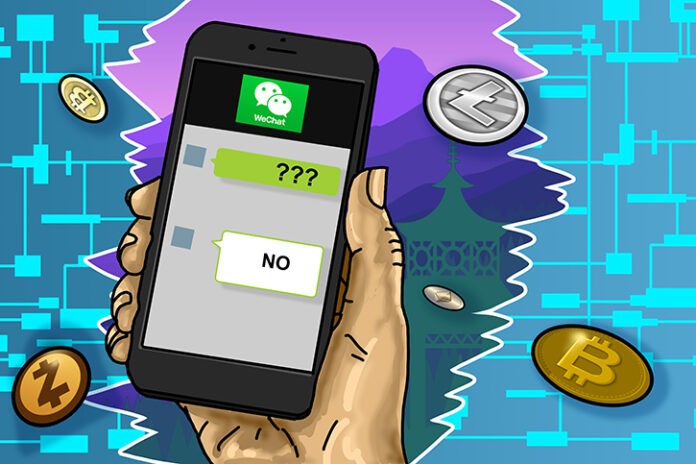 WeChat is one of the largest social platform apps with more than a billion dynamic users from around the globe. This famous Chinese Super App was developed by Tencent and extends several products like messaging, payment within the same app, and social networking.

This giant messaging application has been invented to support mini-programs where developers can sketch programs to run within the messaging framework.

WeChat has recently taken the decision to block Xiao Xieyi, a third party blockchain app, just a day after it was established. It was suspended from operating on the WeChat framework ostensibly for violating their terms of service.

Xiao Xieyi enabled users to encrypt and generate agreements on Ethereum without having to leave WeChat. In a statement, WeChat gave the following explanation to why it suspended Xiao Xieyi:

“Xiao Xieyi has been blocked due to the infringement of service. We regret the satisfaction of the program has been rejected due to the fact that the content is not permitted on the framework.”

Niuco Box Company based in Beijing is the one that developed this third-party blockchain app (Xiao Xieyi) and according to their developers, the app would enable users on WeChat to invent treaty accord and special social media recognition using blockchain technology, something which didn’t sit well with WeChat.

The program would have secured that users’ identities and contents are authentic but at an even rate of $0.50 (3 RMB). The fee would have been used to pay miners who generate contracts on the blockchain.

The founder of Niuco Box, Wang Dengke was quick to respond that the app was not suspended because they use blockchain but instead, he pointed out, because of data encryption.

That being the case, it’s not clear which service conditions were violated for the third-party app to be kicked from the messaging framework. WeChat itself is not opposed to using blockchain technology, since Tencent Holdings issued a whitepaper in 2017 explaining their interest in hiring blockchain staff for their TrustSQL open platform.

Still, Pony Ma, the CEO of Tencent Company announced recently that Tencent Holdings had collaborated with one Chinese city to test blockchain technology for local citizens to track medical prescriptions.

Nevertheless, China has taken firm action towards cryptocurrencies this year. It has banned, wholesale, cryptocurrency trade and ICOs but they remain confident about blockchain. By 2019, China is hoping to have blockchain standards in place for products and services that they will be implementing. In April, the Government helped to raise $1.6 Billion to help local blockchain startups.

At the moment, it’s not clear if WeChat will open up its service scope or not.