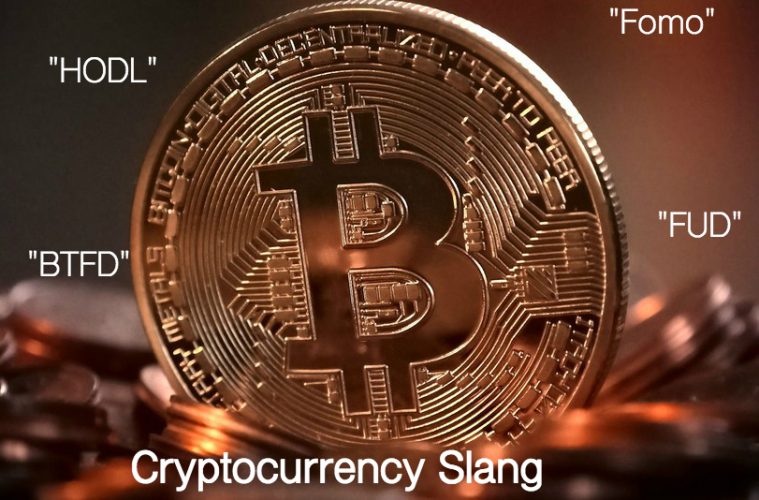 CRYPTOCURRENCY SLANG: WHAT DOES HODL, FOMO, BTFD OR FUD MEAN?

You’ve been ignoring Cryptocurrency for years, but now realise unless you plan on an extended holiday in Antartica, it is now unavoidable. Of course there are many naysayers who still dismiss it and say it’s a pyramid or ponzi scam, but the thing is – as of right now the market cap of all crypto currency is a whopping $829,359,949,520. So, with so many people pouring their cash into Crypto, it makes sense to at least try to understand what is going on….

You may already be actively researching Cryptocurrency and wondering if age is creeping in because you’re clearly not “down with the crypto kids” and unable to understand many abbreviations, slang and lingo whilst scrolling through Reddit, forums, telegram or slack groups?

Sound familiar? Well to help you, I’ve put together a list of the Cryptocurrency Lingo/Slang which hopefully will help you on your quest to understand.

HODL.
A misspelling of ‘hold’ that stuck around to mean ‘keep’. A crypto trader who buys a coin and does not plan on selling in the foreseeable future is called a hodler of the coin.

FOMO.
Short form for ‘fear of missing out’. The feeling when you see a huge green percentage growth on a chart and you don’t own that coin, so you sell other shit to buy into it freaking out. As crypto trading is still very much driven by emotions rather than valuation, FOMO is a huge factor to consider when swing trading in crypto.

Whale.
A huge player who has a substantial amount of capital. Whales are said to have the ability to be market movers for small alt-coins too due to their huge capital.

Pump and Dump.
The recurring cycle of an Altcoin getting a spike in price followed by a huge crash. Such movements are often attributed to low volume, hence the ‘pump’. Traders who pump, buying huge volumes, may wish to invoke FOMO from the uninformed investors and then dump, or sell, their coins at a higher price.

Shill.
The act of unsolicited endorsing of the coin in public. Traders who bought a coin has an interest in shilling the coin, in hopes of igniting the public’s interest in that particular coin.

Bag Holder.
A term to refer to a trader who bought in at a high and missed his opportunity to sell, leaving him with worthless coins.

Long.
A position that a trader takes. To take a long position on something is to believe its value will rise in the future.

Short.
A position that a trader takes. To take a short position on a coin is to believe its value will fall in the future.

Limit Order.
An order placed at a future price that will execute when the price target is hit.

Borrowing Rate.
When you open a leveraged position, you will be borrowing coins at a pre-determined rate. This rate will be added to reflect your position’s overall profit and loss.

Lending Rate.
Some exchanges have lending accounts. You may deposit your coins into these lending accounts to lend your coins for others to execute their leveraged trades. The lending rate fluctuates throughout the day based on the demand for shorting the coin.

Fill or Kill.
A limit order that will not execute unless an opposite order exceeds this limit order’s amount.

BUY | SELL Wall.
A wall as seen in the depth chart of exchanges is an amalgamation of limit orders of the same price target.

DDOS.
Short form for ‘Distributed Denial of Service’.
A well-timed DDoS attack at exchanges during volatile movements may be devastating as traders will not be able to execute any order manually and will be at the mercy of their pre-set, or the lack of, limit orders.

ICO.
Short form for “Initial Coin Offering”, which takes a page from the usual IPOs investors know.
Coins bought during ICOs are usually sold for a profit when the coin first hits exchanges. This is due to the initial hype which increases demand for the coin.
On the supply side, ICOs create entry barriers as the buyer has to set up his private wallet to receive the coins from the ICO purchase.

Arbitrage.
The act of buying and selling on different exchanges to earn the difference in the spread. Arbitrage opportunities occur due to differences in exchange reputation, community coin preferences and ease of bank funding.
Take note that fees, limits and prices could change anytime when you are transferring your coins between exchanges, especially during volatile times.

BTFD
“Buy The Fucking Dip” – When people are running around and selling because of fear, this is the time to buy.

Weak Hands
Those who cannot be patient and sell at loss when the market is down.

Have I missed out any Cryptocurrency lingo that you would like to add?